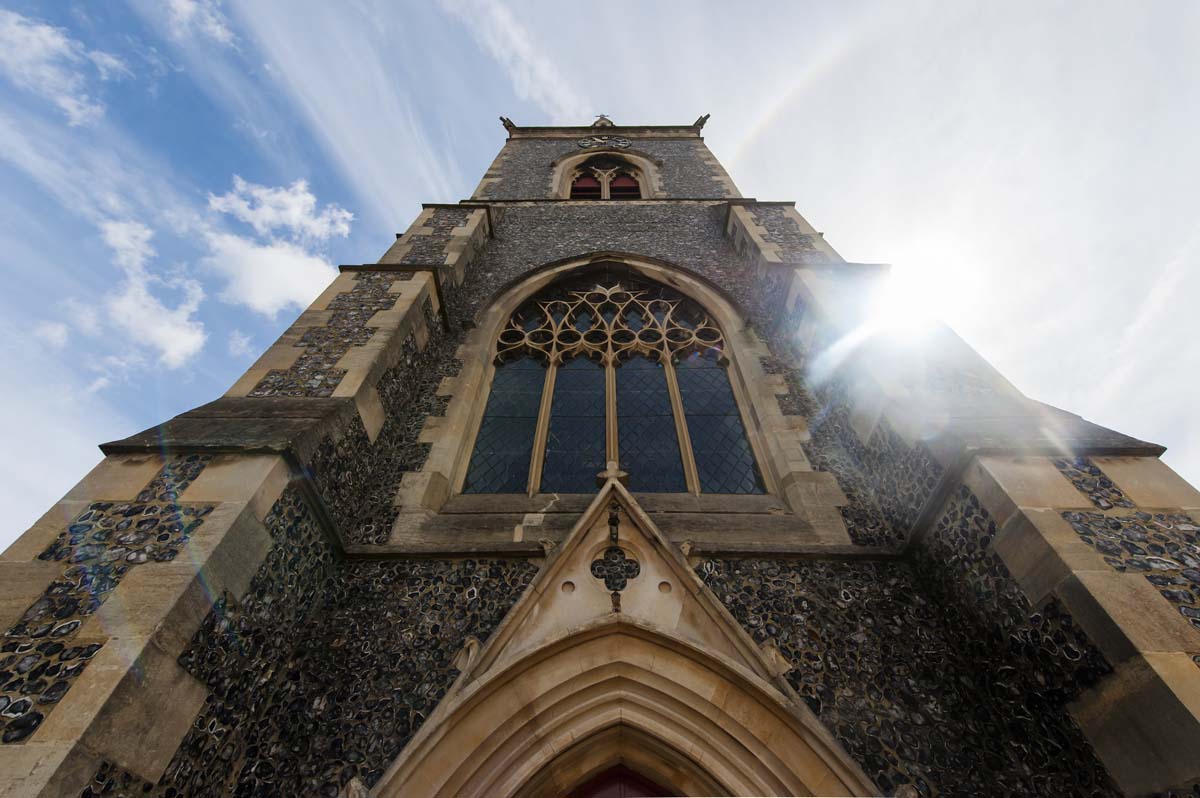 Holy Trinity School was opened by the Bishop of Rochester in March 1896. It was built for about 400 pupils and cost the sum of £3000! The school in Bute Road was the results of the amalgamation of three prior schools, a Boys’ school, a Girls’ school and Infants in the local area and had two separate entrances.

Holy Trinity School was opened by the Bishop of Rochester in March 1896. It was built for about 400 pupils and cost the sum of £3000! The school in Bute Road was the results of the amalgamation of three prior schools, a Boys’ school, a Girls’ school and Infants in the local area and had two separate entrances.

Holy Trinity School was opened by the Bishop of Rochester in March 1896. It was built for about 400 pupils and cost the sum of £3000! The school in Bute Road was the results of the amalgamation of three prior schools, a Boys’ school, a Girls’ school and Infants in the local area and had two separate entrances. Although housed in the same building the schools were run separately and each school had a head teacher until 1956 when the Boys and Girls and Infants were amalgamated with Mrs Barty as head teacher. (One of the rooms which provided an extension to the current building is named after her – the Barty Room).

“Only with Thee, O God, we journey safely on.”

On 24th September 1961 there was a transfer of the infants to Beddington School and juniors to Holy Trinity.

Memories of how it used to be…

For the 100th anniversary of the school, a local author Mrs Pamela Vernon created a wonderful book. Here are some extracts from previous pupils who attended the school from just before World War II and during World War II.

Mrs Kathleen Geary (nee Wilson) was at school at Holy Trinity from 1934 until 1937. She remembers that the school was in three sections. “The girls’ section was one large room with a “pot stove” fire in the centre and a curtain down the middle to make two classrooms. Mrs Harding took the 8-11 year olds and Mrs Manning the 12-14 year olds. In those days one left school the day you reached the ripe old age of 14. Mind you, I don’t remember a single person who could not read. Tables were chanted and were tested regularly, not only by Mrs Harding but also by the many visitors and managers.

As it was a church school, we regularly attended services at Maldon Road. Rev. Howard Bannister was the Vicar. On Ascension Day, we went to school, then walked to church then back to school where we were dismissed for the rest of the day.

I also remember Empire Day, dressed in our best (white dresses for the girls if possible.) We paraded in the playground round the flag pole and had a short service with lots or patriotic hymns such as “I vow to Thee my Country”,”Land of our Birth” and “Land of Hope and Glory.”

The school had gardens and we were divided into groups and we all had an allotment. There was great competition as to who kept the best one.

Every Friday we had to take polish and a rag to clean our desks, chairs and inkwells. Holy Trinity taught us pride in ourselves. I not only learned the foundations of my education but a sense of duty to God, King and country and to other folk.”

The classrooms had wooden floors and were divided by heavy curtains. When the school was rebuilt, “what joy to have central heating and separate classrooms, also a proper hall, named after Howard Bannister, the then Vicar of Holy Trinity. In the new quadrangle, we kept pet rabbits.

At the coming of war, half the playground was dug up for long shelters, with a toilet at one end. We had lessons in the shelters. The teachers often used to stop on the way to the shelters to watch the “Dog fights” overhead. The school was bomb damaged and we had lessons in peoples’ houses. The

heating was not working when we returned to school so we had to carry oil heaters with us every day. (We needed them at home too.) During the “doodle bug raids”, mothers used to take home a horde of children. They would appear at the shelter door and ask if any children were coming their way, and if your house were en route, you were allowed home. We had to learn to lie flat whenever the teacher shouted “Down,” and she would thump any bottoms in the air.”

During WWII the school had many interruptions, with attendance being low on some days due to prolonged air raids, and there was some bomb damage to the school which meant that some of the older classes had to be taught at Bandon Hill. When children had to go to the air raid shelters during lesson they would sing very loudly so that teachers would not hear the all clear!

Many children were evacuated in July 1944. When VE day was announced in May 1945 the school was closed for two days.

There have been many special occasion that were celebrated at the school many associated with royalty :

25.06.1897 A holiday was given on Monday, Tuesday and Wednesday in commemoration of the 60 years of the Reign of Her Majesty the Queen Victoria.

11.11.1919 Anniversary of the Armistice. The King’s proclamation read, two minutes silence observed and a lesson given on “The League of Nations.”

24.02.1923 A holiday is given today in honour of the marriage of H.R.H. The Duke of York with Elizabeth Bowes Lyon. (The current Queen’s father and mother.).

01.06.1953 School closed for the Coronation of Her Majesty Queen Elizabeth II.

29.01.1965 Tributes were made in remembrance of Sir Winston Churchill.

Poor health caused concerns in the school’s history and ranged from scarlet fever, to ringworm, to measles, as well as sore throats and chills.

Lateness seems to have been a concern as many children had long walks to get to school. In 1871 children who were late to school were made to stand up in class all morning. In 1873 two children weren’t allowed in to the building because they were late and in 1891 four children were ‘dismissed’ for not attending regularly enough! Times have changed. 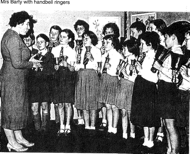 Music has been a significant subject in the school for many years. When Mrs Barty was head teacher the school took part in many music festivals, in Carshalton public Hall and then Fairfield halls. There was a hand bell team and a wind band. It was in honour of Mrs Barty that the extension of the music room was named in the current school building. Musical summer productions began with a class teacher called Mr Matthews in 1988, and have continued to the current time by Year 6.

Holy Trinity has always been an outward looking school who endeavoured to look to the needs of others and not just themselves. This has ranged from a collection for blind soldiers in 1921 of 12 shillings and one penny to sending a hamper of food to a family who had suffered with flooding in Exeter in 1960 to the many charities that the school support today such as Children in Need, Jeans for Genes Day, The Poppy Appeal, The Royal Marsden, etc.

The choir began singing to the elderly folk at Holy Trinity Church in 1960 and this tradition has continued every Christmas.

On 5th September 1961 – 180 children were transferred from Beddington Church of England Junior School and Holy Trinity Infants were admitted in exchange to their school. 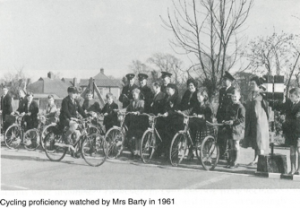 Cycling proficiency training started at the school in 1959 and has continued ever since.

On the 1st April 1965 the school was under the new London Borough of Sutton instead of Surrey County Council.

In June 1970 – a ‘staff surgery’ where staff met parents to talk about their children’s progress began, and continues today as parents’ evenings appointments!

‘Friends of School’ (PFOS now – Parents and friends of School) began in 1979 and within a year they raised £1,300 to buy additional school equipment.

The church was built in 1867 to seat 530, which was interesting since Wallington at the time had a population of less than 500! Holy Trinity Church expanded in to St Patrick’s’ in 1932 and then Springfield in 1992, and now all three churches support the school and children from those churches attend this school.

The school had its first full Ofsted in 1994, the year that school inspections started. It was listed as ‘a school with many strengths.’

In 1996, when the booklet to mark the 100th anniversary of the school was produced by Mrs Vernon, the head teacher of the time, Mr Chatfield, wrote;

“Resources in school have changed beyond recognition. Television can assist with learning and computers are an essential part of every classroom. We need a larger hall, more playground space and permanent accommodation in place of temporary classrooms.” (That was finally achieved in 2010). “We maintain a Christian environment in the school. We encourage the children to work to the best of their ability, to care for others and to be aware of spiritual values”